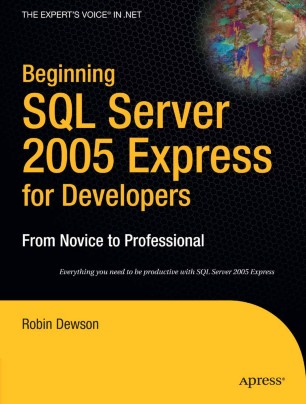 This book is a comprehensive guide that covers installing and configuring SQL Server 2005 Express, creating, backing up, and restoring databases, creating tables, then querying and manipulating them with T-SQL, coding stored procedures and triggers, and using Reporting Services to deliver information to end users. Detailed, clear, and highly readable, this book will make you a competent and confident database administrator and programmer.

Robin Dewson has been hooked on programming ever since he bought his first computer, a Sinclair ZX80, in 1980. He has been working with SQL Server since version 6.5 and Visual Basic since version 5. Robin is a consultant mainly in the city of London, where he has been for nearly eight years. He also has been developing a rugby-related website as well as maintaining his own site at Fat-Belly.com.