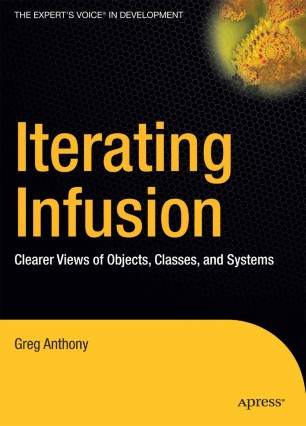 Iterating Infusion: Clearer Views of Objects, Classes, and Systems is a one-of-a-kind book, not dependent on any single technology. Rather, it provides a way to integrate the most efficient techniques from a variety of programming methods, in a manner that makes designing and programming software look easy.

The title, Iterating Infusion, alludes to the fact that any system has multiple, coexisting functional levels and that new levels—both lower and higher—are continually added to the same functional area. The practical effect is to bring processes into focus, always clarifying the vague. The extreme form of this is when separate but compatible technologies are brought together to create advancements; these can be baby-steps or great leaps, with varying amounts of effort. In more general terms, the same thing in a different context can take on much more power. And actually, this phenomenon is at the heart of object-oriented software.

Readers have been confirming that, compared to books on just low-level details, Iterating Infusion presents cohesive insights that allow you to solve more problems with the same effort in more key places.

Greg Anthony is a systems analyst who has been designing and programming software since he was 8 years old. He has worked in all areas of development and systems management, from PC to midrange to mainframe environments. Throughout his career, Greg has created utilities of all sizes to automate development tasks, especially code generators (fourth-generation tools), code analyzers, version-control facilities, and system software interface redesigns, enabling high-end user-friendliness and efficiency in execution and development. He is an alumnus of the Johns Hopkins University's Center for Talented Youth, the landmark organization for children ages 8 to 18.