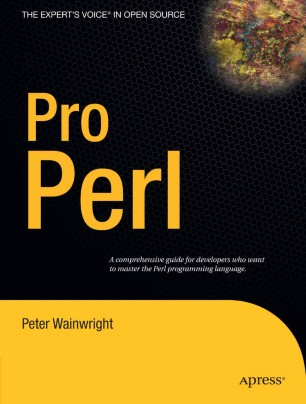 Over the years, Perl has grown from an elegant scripting tool into a mature and full-featured language for application development, boasting object-oriented programming, a flexible threading model, built-in support for Unicode, and a thriving community. Available on almost every platform, and offering a comprehensive library of modules, there is no task too big or small for Perl to tackle.

Pro Perl helps you master the key features and complexities of this powerful language. Aimed at intermediate and advanced developers alike, the material assumes some general knowledge of programming concepts but not necessarily prior Perl experience. However, given the expansive coverage of core language topics, Pro Perl also serves as a valuable guide to seasoned Perl programmers seeking to push their proficiency to the next level.

Using a depth-first approach to aid learning of advanced concepts, you're provided with detailed examinations of many key topics, including regular expressions, networking, modules and packages, object-oriented development, and much more. Pro Perl seeks to provide developers with not only the answers to their programming questions, but also advanced ideas and related concepts that expand the developer's understanding of Perl as a language.

Peter Wainwright is a developer and software engineer specializing in Perl, Apache, and other open-source projects. He got his first taste of programming on a BBC Micro and gained most of his early programming experience writing applications in C on Solaris. He then discovered Linux, shortly followed by Perl and Apache, and has been happily programming there ever since. When he is not engaged in development or writing books, Wainwright spends much of his free time maintaining the Space Future website at www.spacefuture.com. He is an active proponent of commercial passenger space travel and cofounded Space Future Consulting, an international space tourism consultancy firm.