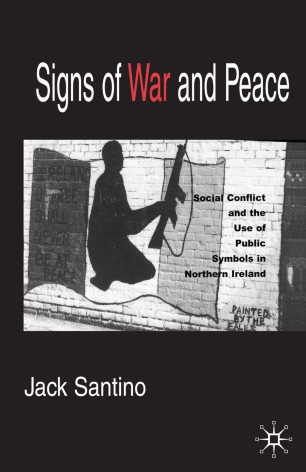 Signs of War and Peace

Signs of War and Peace focuses on the role public display plays in the conflict in Northern Ireland. In doing so, it ranges freely over other times, places, and events that shed light on the social and political processes and dynamics involved in public display traditions, such as the Saint Patrick's Day parades in Boston, Massachusetts, and the popular spontaneous shrines to Lady Diana in London. The book is about the nature of public display, its relationships to class-based aesthetics, tradition, and popular style. It is also about contest, conflict, and civil war, and the ways the former are intimately intertwined with the latter, both in Northern Ireland and elsewhere throughout the world. The work is interdisciplinary, combining ethnographic, anthropological, folkloristic, and performance studies approaches. The manuscript benefits from large amount of field work in Ireland, and as a result contains both ethnographic data and revealing interviews with many people in Northern Ireland who have participated in the display events Santino seeks to analyze. The perspective that Santino offers helps to explain the intensity of the conflict as well as the origination, motivations, and justifications of bonfires, murals, commemorative displays, parades, etc. that symbolically articulate what he terms the 'dual master narratives' that underlie and in many ways help to articulate the parameters of that conflict.

JACK SANTINO is Professor of Popular Culture at Bowling Green State University. He is the author of five books and is the creator of two documentary films, one of which, Miles of Smiles, Years of Struggle, won four Emmy awards. Santino is also the editor of the Journal of American Folklore.