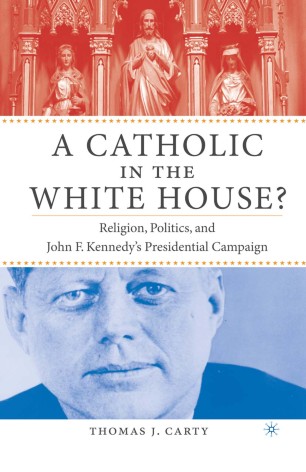 A Catholic in the White House?

According to most political and religious scholars and pundits, JFK's victory in 1960 symbolized America's evolution from a Protestant nation to a pluralist community that included Catholics as all citizens. However, if the presidential election of 1960 was indeed a turning point for American Catholics, how do we explain the failure of any Catholic - in over forty years - to repeat Kennedy's accomplishment? In this exhaustively researched study that fuses political, cultural, social and intellectual history, Thomas Carty challenges the assumption that JFK's successful campaign for the Presidency ended decades, if not centuries, of religious and political tension between American Catholics and Protestants, paving a new role for Catholics in American presidential politics.

"Thomas Carty's treatment of John F. Kennedy's Catholicism and how it influenced the outcome of the 1960 campaign is the most influential since Theodore H. White's classic book, The Making of the President, 1960. A timely and important work." - John Kenneth White, Professor of Politics, The Catholic University of America

"It is an axiom that 'the Catholic issue' embroiled the 1960 campaign, but this book is the first to take us beyond folklore to scholarship. Scrupulously argued and widely researched, A Catholic in the White House? examines the varieties of anti-Catholic concerns and phobias in 1960 and their impact. It captures the flavor of that riveting campaign and shrewdly analyzes the role of Catholicism in national politics both before and since 1960." - Richard M. Fried, University of Illinois at Chicago

"Religion, and Catholicism in particular, informs U.S. political life in subtle ways that often escape notice. In an engaging demonstration of this dynamic, Thomas Carty skillfully explores the multiple contexts and players that shaped John F. Kennedy's successful bid for the nation's highest office, from the role of Catholic anti-communism during the Cold War, to Kennedy's complex relationships with Protestants and liberals. A Catholic in the White House? will be required reading for those who wish to understand the importance of 'the Catholic issue' in American presidential politics, from the candidacy of Al Smith in 1928 to that of John Kerry in 2004." - R. Scott Appleby, Professor of History, University of Notre Dame

"Thomas Carty's A Catholic in the White House? is the first comprehensive scholarly examination of the 'Catholic issue' in the 1960 election. Carty provides a rich historical context, then explores the role of evangelical and mainstream Protestants, political liberals, and Catholics as they confronted the Kennedy candidacy and campaign. His treatment of the campaign includes original in-depth examination of the vote in key states. This is an important, timely book which deserves attention from everyone interested in American politics." - David J. O'Brien, Loyola Professor of Roman Catholic Studies, College of the Holy Cross