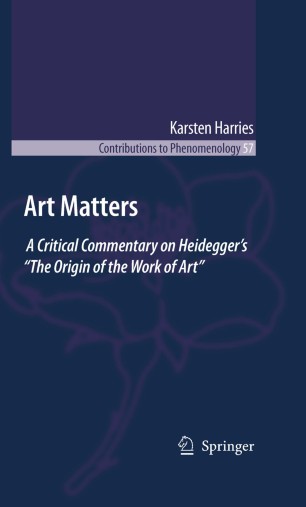 Part of the Contributions To Phenomenology book series (CTPH, volume 57)

In recent years there has thus been a great deal of talk about a possible death of art. As the title of Heidegger’s "The Origin of the Work of Art" suggests, the essay challenges such talk, just as it in turn is challenged by such talk, talk that is supported by the current state of the art-world. It was Hegel, who most profoundly argued that the shape of our modern world no longer permits us to grant art the significance it once possessed. Hegel’s proclamation of the end of art in its highest sense shadows this commentary, as it shadows Heidegger’s essay. Heidegger’s problematic turn from the philosopher Hegel to the poet Hölderlin is born of the conviction that we must not allow Hegel to here have the last word. At stake is the future of art. But more importantly, if we are to accept Heidegger’s argument, at stake is the future of humanity. But all who are eager to find in Heidegger’s essay pointers concerning where not just art, but we should be heading, should be made wary by Heidegger’s politicizing of art and aestheticizing of politics. Both remain temptations that demand a critical response. This commentary demonstrates the continued relevance of Heidegger’s reflections.