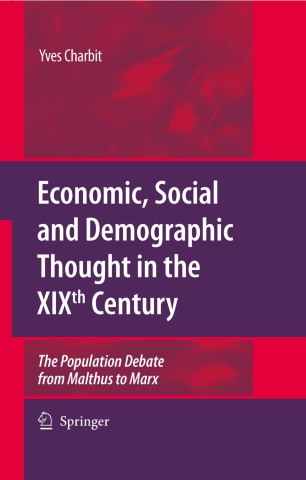 Economic, Social and Demographic Thought in the XIXth Century

The Population Debate from Malthus to Marx

According to current understanding, Malthus was hostile to an excess of population because it caused social sufferings, while Marx was favourable to demographic growth in so far as a large proletariat was a factor aggravating the contradictions of capitalism. This is unfortunately an oversimplification. Both raised the same crucial question: when considered as an economic variable, how does population fit into the analysis of economic growth? Even though they started from the same analytical standpoint, Marx established a very different diagnosis from that of Malthus and built a social doctrine no less divergent. The book also discusses the theoretical and doctrinal contribution of the liberal economists, writing at the onset of the industrial revolution in France (1840-1870), and those of their contemporary, Pierre-Joseph Proudhon, who shared with Marx the denunciation of the capitalist system. By paying careful attention to the social, economic, and political context, this book goes beyond the shortcomings of the classification between pro- and anti-populationism. It sheds new light over nineteenth century controversies over population in France, a case study for Europe.