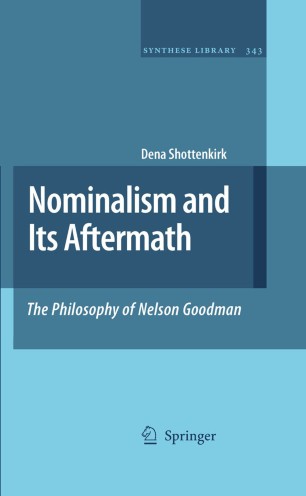 Nominalism and Its Aftermath: The Philosophy of Nelson Goodman

Nelson Goodman’s disparate writings are often written about only within their own particular discipline, such that the epistemology is discussed in contrast to others’ epistemology, the aesthetics is contrasted with more traditional aesthetics, and the ontology and logic is viewed in contrast to both other contemporary philosophers and to Goodman’s historical predecessors. This book argues that that is not an adequate way to view Goodman. The separate disciplines of ontology, epistemology, and aesthetics should be viewed as sequential steps within his thought, such that each provides the ground rules for the next section and, furthermore, providing the reasons for limitations on the terms available to the subsequent writing(s). This is true not merely because this is the general chronology of his writing, but more importantly because within his metaphysics lies Goodman’s basic nominalist ontology and logic, and it is upon those principles that he builds his epistemology and, furthermore, it is the sum of both the metaphysics and the epistemology, with the nominalist principle as the guiding force, which constructs the aesthetics. At the end of each section of this book, the consequent limitations imposed on his terms and concepts available to him are explicated, such that, by the end of the book, the book delineates the constraints imposed upon the aesthetics by both the metaphysics and the epistemology.

"The author has given us the needed scholarly reference work on Goodman. Goodman sought to replace psychology with semantics, and showed us how far we could travel in that direction. The trip was admirably designed and guided by his genius. In end, it was genius, and not the lack of it, that showed us that the philosophy of language and languages of art will lead us back to the hardest questions in the philosophy of mind." Keith Lehrer, Regents Professor of Philosophy, The University of Arizona