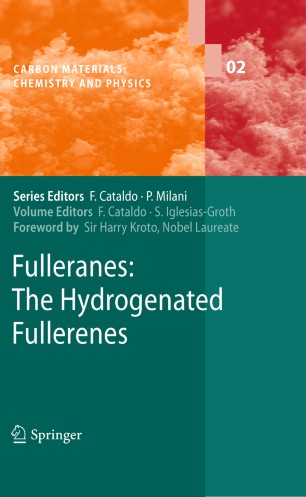 Fulleranes are a special class of carbon molecules derived from fullerenes whose double bonds are partially or at least theoretically fully saturated by hydrogen. The hydrogenation changes the chemical properties of fullerenes which can become susceptible to substitution reactions as opposed to addition reactions to the double bonds (present in common fullerenes). One of the most intriguing aspects of fulleranes is the fact that they have been thought to exist in the interstellar medium or even in certain circumstellar media. The reasoning is quite simple: if fullerenes can be formed in the interstellar or better in the circumstellar medium, then they should undergo a simple hydrogenation reaction because of the ubiquitous presence of hydrogen in the universe. There is therefore a need not only to synthesize fulleranes in order to study their properties but also to study their infrared and electronic absorption spectra. Such spectra are used in the search for these molecules in the interstellar medium and around certain promising carbon-rich stars. Many efforts have been made by chemists and chemical physicists to synthesize these molecules at different degrees of hydrogenation and to record their spectra. Thus, Fulleranes: The Hydrogenated Fullerenes presents the state of the art research, synthesis and properties of these molecules; astrophysicists and astrochemists detail their expectations regarding the presence of these molecules in space.

Fulleranes: The Hydrogenated Fullerenes is written for researchers, postgraduates, and advanced undergraduates in organic synthetic chemistry, physical chemistry, and astrophysics.