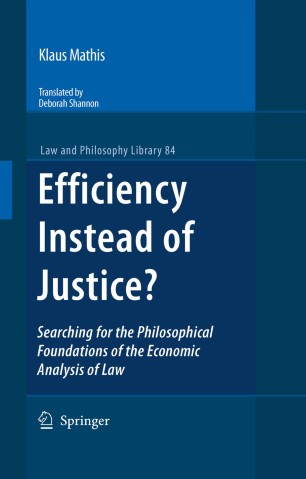 Efficiency Instead of Justice?

Searching for the Philosophical Foundations of the Economic Analysis of Law

Economic analysis of law is an interesting and challenging attempt to employ the concepts and reasoning methods of modern economic theory so as to gain a deeper understanding of legal problems. According to Richard A. Posner it is the role of the law to encourage market competition and, where the market fails because transaction costs are too high, to simulate the result of competitive markets. This would maximize economic efficiency and social wealth.

In this work, the lawyer and economist Klaus Mathis critically appraises Posner’s normative justification of the efficiency paradigm from the perspective of the philosophy of law. Posner acknowledges the influences of Adam Smith and Jeremy Bentham, whom he views as the founders of normative economics. He subscribes to Smith’s faith in the market as an ideal allocation model, and to Bentham’s ethical consequentialism. Finally, aligning himself with John Rawls’s contract theory, he seeks to legitimize his concept of wealth maximization with a consensus theory approach.

In his interdisciplinary study, the author points out the possibilities as well as the limits of economic analysis of law. It provides a method of analysing the law which, while very helpful, is also rather specific. The efficiency arguments therefore need to be incorporated into a process for resolving value conflicts. In a democracy this must take place within the political decision-making process. In this clearly written work, Klaus Mathis succeeds in making even non-economists more aware of the economic aspects of the law.

"Mathis gives a succinct and lucid presentation of the economic theory of law, and of the problems associated with its application as a normative theory in law. At the same time, he rightly draws attention to the advantages associated with this approach, and provides a helpful and thoroughly ambitious introduction to its fundamental principles."
Prof. Dr. Jan-R. Sieckmann, Archives for Philosophy of Law and Social Philosophy (ARSP), Vol. 91/2 (2006)