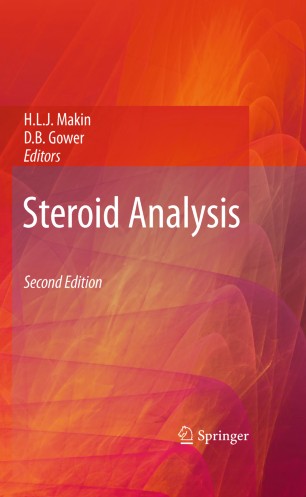 This comprehensive and up-to-date 2nd edition of the Steroid Analysis handbook, written by a team of distinguished experts from around the world concentrates on the analysis of steroids in biological fluids. This edition is based on the same format as the first, primarily dealing with analysis of low levels of steroid analytes in biological fluids, but including an extra chapter on pharmaceutical aspects of steroid analysis. Spectroscopic and other methods, including UV and IR absorption spectroscopy, NMR spectroscopy, mass spectrometry, X-ray diffraction, chromatography and immunoassay of steroids are treated in detail. Discussion of general methods for extraction, purification and quantitation is followed by consideration of the analysis of specific important steroid groups, such as progestagens, estrogens, corticosteroids, vitamins D, bile acids and anabolic steroids and their metabolites. The editors have made a conscious decision to leave the first edition to stand on its own with regards to steroid analysis prior to 1995 and authors therefore were asked to review the modern post-1995 steroid scene, though pre-1995 data were not excluded if authors felt it was necessary. This book should be of interest to analytical chemists, biochemists and chemical pathologists with an interest or involvement in steroids.