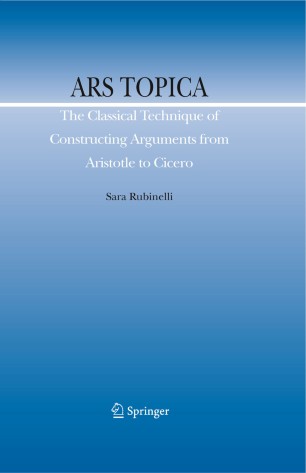 The Classical Technique of Constructing Arguments from Aristotle to Cicero

Ars Topica is the first full-length study of the nature and development of topoi, the conceptual ancestors of modern argument schemes, between Aristotle and Cicero.

Aristotle and Cicero configured topoi in a way that influenced the subsequent tradition. Their work on the topos-system grew out of an interest in creating a theory of argumentation which could stand between the rigour of formal logic and the emotive potential of rhetoric. This system went through a series of developments and transformations resulting from the interplay between the separate aims of gaining rhetorical effectiveness and of maintaining dialectical standards.

Ars Topica presents a comprehensive treatment of Aristotle’s and Cicero’s methods of topoi and, by exploring their relationship, it illuminates an area of ancient rhetoric and logic which has been obscured for more than two thousand years.

Through an interpretation which is philologically rooted in the historical context of topoi, the book lays the ground for evaluating the relevance of the classical approaches to modern research on arguments, and at the same time provides an introduction to Greek and Roman theory of argumentation focussed on its most important theoretical achievements.