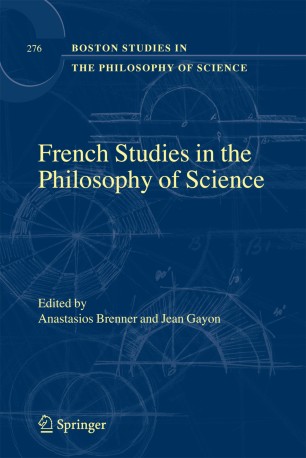 French Studies In The Philosophy Of Science

Part of the Boston Studies In The Philosophy Of Science book series (BSPS, volume 276)

Having examined previous volumes of the Boston Studies series devoted to different countries, and having discussed the best way to present contemporary research in France, we have arrived at a careful selection of 15 participants, including the organizers. Our aim is to bring together philosophers and practicing scientist from the major institutions of the country, both universities and research centers.

The areas of research represented here cover a wide spectrum of sciences, from mathematics and physics to the life sciences, as well as linguistics and economics. This selection is a showcase of French philosophy of science, illustrating the different methods employed: logico-linguistic analysis, rational reconstruction and historical inquiry. These participants have the ability to relate their research both to the French tradition and current discussions on the international scene. Also included is a substantial historical introduction, explaining the development of philosophy of science in France, the various schools of thought and methods as well as the major concepts and their significance.