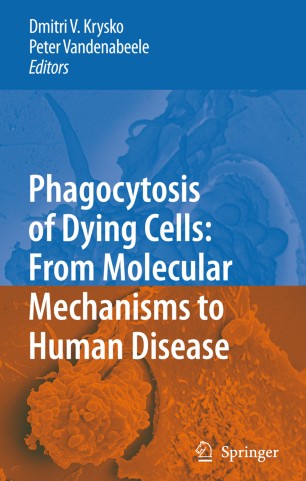 Phagocytosis of Dying Cells: From Molecular Mechanisms to Human Diseases

Phagocytosis has been at the forefront of cell biology for more than a century. Initially, phagocytosis, which comes from Greek words meaning “devouring cells,” was discovered in the late 19th century by Ilya Metchnikoff, who was awarded, together with Paul Ehrlich, the Nobel Prize in Physiology and Medicine in 1908 “in recognition of their work on immunity.” At that time Metchnikoff had already identified a function for phagocytes not only in host defense but also as scavengers of degenerating host cells during metamorphosis of tadpoles, thus providing one of the first descriptions of apoptotic cell clearance by macrophages (Kaufmann 2008). Since then, much has been learned about phagocytosis, and the previous several decades have witnessed outstanding progress in understanding the functions and the molecular mechanisms of phagocytosis. Two main types of targets are cleared by phagocytosis: microbial pathogens and dying cells. Rapid recognition and clearance of dying cells by phagocytes plays a pivotal role in development, maintenance of tissue homeostasis, control of immune responses, and resolution of inflammation. Clearance of dying cells can be divided into several stages, including sensing, r- ognition, binding and signaling, internalization, and immunological responses. In this book, our contributors address these different stages of dead cell cle- ance and examine how impaired clearance of dying cells may lead to human d- eases. We have attempted to provide sufficient cross-referencing and indexing to enable the reader to easily locate the ideas elaborated in the different chapters.