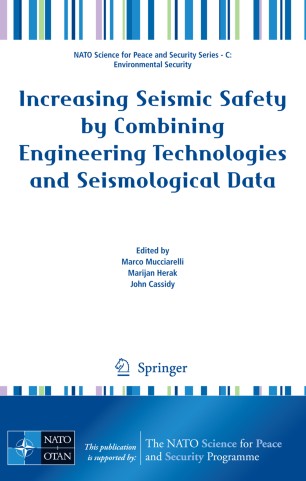 The current state-of-the-art allows seismologists to give statistical estimates of the probability of a large earthquake striking a given region, identifying the areas in which the seismic hazard is the highest. However, the usefulness of these estimates is limited, without information about local subsoil conditions and the vulnerability of buildings. Identifying the sites where a local ampli?cation of seismic shaking will occur, and identifying the buildings that will be the weakest under the seismic shaking is the only strategy that allows effective defence against earthquake damage at an affordable cost, by applying selective reinforcement only to the structures that need it. Unfortunately, too often the Earth’s surface acted as a divide between seism- ogists and engineers. Now it is becoming clear that the building behaviour largely depends on the seismic input and the buildings on their turn act as seismic sources, in an intricate interplay that non-linear phenomena make even more complex. These phenomena are often the cause of observed damage enhancement during past ear- quakes. While research may pursue complex models to fully understand soil dyn- ics under seismic loading, we need, at the same time, simple models valid on average, whose results can be easily transferred to end users without prohibitive expenditure. Very complex models require a large amount of data that can only be obtained at a very high cost or may be impossible to get at all.