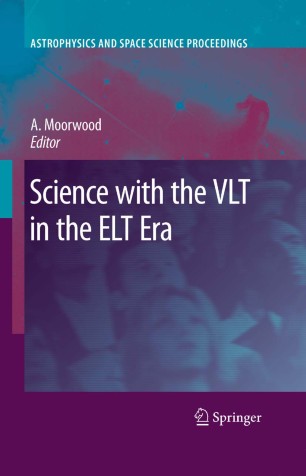 Science with the VLT in the ELT Era

The Workshop “Science with the VLT in the ELT Era” held in Garching from 8th to 12th October 2007 was organised by ESO, with support from its Scienti c and Technical Committee, to provide a forum for the astronomical community to debate the long term future of ESO’s Very Large Telescope (VLT) and its interferometric mode (VLTI). In particular it was considered useful for future planning to evaluate how its science use may evolve over the next decade due to competition and/or synergy with new facilities such as ALMA, JWST and, hopefully, at least one next generation 30–40 m extremely large telescope whose acronym appears in the title to symbolise this wider context. These discussions were also held in the fresh light of the Science Vision recently developed within ASTRONET as the rst step towards a 20 year plan for implementing astronomical facilities—the rst such attempt within Europe. Speci c ideas and proposals for new, second generation VLT/I instruments were also solicited following a tradition set by several earlier Workshops held since the start of the VLT development. The programme consisted of invited talks and reviews and contributed talks and posters. Almost all those given are included here although, unfortunately not the several lively but constructive discussion sessions.