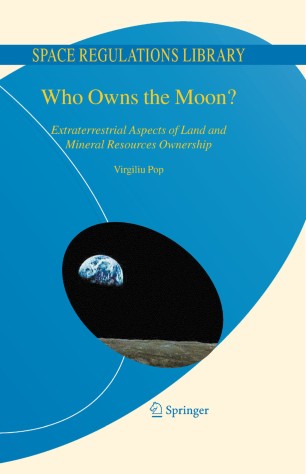 Who Owns the Moon?

This work investigates the permissibility and viability of property rights on the celestial bodies, particularly the extraterrestrial aspects of land and mineral resources ownership. In lay terms, it aims to find an answer to the question "Who owns the Moon?" After critically analyzing and dismantling with legal arguments the trivial issue of sale of extraterrestrial real estate, the book addresses the apparent silence of the law in the field of landed property in outer space, scrutinizing whether the factual situation on the extraterrestrial realms calls for legal regulations. The legal status of asteroids and the relationship between appropriation under international law and civil law appropriation are duly examined, as well as different property patterns – such as the commons regime, the Common Heritage of the Mankind, and the Frontier paradigm.

Virgiliu Pop is one of world's specialists in the area of space property rights. A member of the International Institute of Space Law, Virgiliu has authored several acclaimed papers in the field of space law and policy, and was interviewed by prestigious media outlets as diverse as New Scientist, Space.com/MSNBC, The Space Show, La Tercera (Chile), Ta Nea (Greece), Geo Magazine (Germany) and several publications in his native Romania.