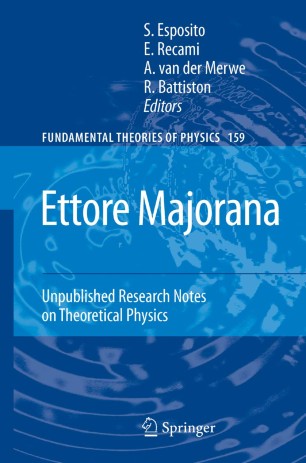 The editors of this volume bring to life a major part of Ettore Majorana’s work that up to now was not accessible to the general audience. These are the contents of the Quaderni (notebooks) of Ettore Majorana, edited and translated in English.
Ettore Majorana had an astounding talent for Physics that made an impression on all the colleagues who had the opportunity to know him. Enrico Fermi, who took him in his group when he was a student, ranked him with Galilei and Newton. Ettore Majorana’s career was cut short in 1938, as he mysteriously disappeared at the age of 32, leaving many unpublished works.
This book reveals an interesting perspective over the points of view, the interests, the approach to physical problems of this great physicist and it shows that he had advanced his comprehension of physics to levels that were only reached by other physicists ten years after, or even later. The editors have inserted minimal text, in order to leave the original calculations by Majorana intact, and at the same time help the reader when the formalism had been left unexplained. The preface to this book provides fascinating reflections on the life and pioneering work of this exceptional physicist, placing it in the context of the physical discoveries of the following years. This book will have considerable interests to all those interested in the development of the history of Physics.

Audience:
Theoretical physicists and scholars interested in the history of Physics