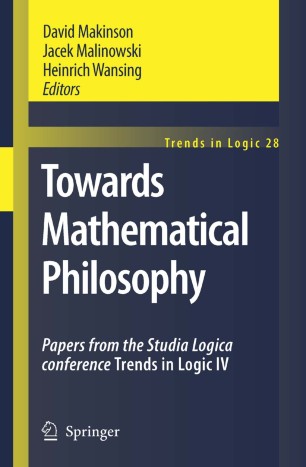 Papers from the Studia Logica conference Trends in Logic IV

Part of the Trends in Logic book series (TREN, volume 28)

This volume contains a collection of articles applying methods of logic or, more generally, of mathematics to solve problems, some of which come from logic itself, others from other sciences. Its range of subjects is far from complete, but broadly representative.

The first group of papers in this volume consists of contributions to pure and applied modal logic. The problems discussed here range from the structure of lattices of normal and other modal propositional logics to modal proof theory and to the semantics of quantified modal logic. The second group of papers deals with Many-valued logics - an extensive domain of strictly logical investigations rooting in philosophical questions concerning the nature of logical values. Logical investigations in cognitive science have successfully utilized methods and systems of belief revision, non-monotonic logic and dynamic epistemic logic. Towards Mathematical Philosophy deals with focal issues of belief revision. The volume concludes with contributions which may be seen to belong to the field of formal epistemology, the area applying logical, probabilistic, game-theoretic and other formal methods to problems and issues in epistemology and philosophy of science, such as those concerning anti-realism, skepticism, theory comparison and theory choice, justification, sources of knowledge and learning theories.