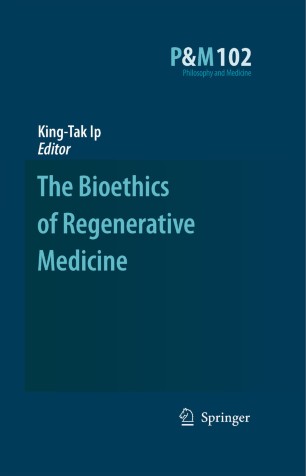 The Bioethics of Regenerative Medicine

Part of the Philosophy and Medicine book series (PHME, volume 102)

Regenerative medicine is rich with promethean promises. The use of human embryonic stem cells in research is justified by its advocates in terms of promises to cure a wide range of diseases and disabilities, from Alzheimer’s and Parkinsonism to the results of heart attacks and spinal cord injuries. More broadly, there is the promethean allure of being able to redesign human biological nature in terms of the goals and concerns of humans. Needless to say, these allures and promises have provoked a wide range of not just moral but metaphysical reflections that reveal and reflect deep fault-lines in our cultures.

The essays in this volume, directly and indirectly, present the points of controversy as they tease out the character of the moral issues that confront any attempt to develop the human regenerative technologies that might move us from a human to a post-human nature. Although one can appreciate the disputes as independently philosophical, they are surely also a function of the conflict between a Christian and a post-Christian culture, in that Christianity has from its beginning recognized a fundamental prohibition against the taking of early human life. Even the philosophical disputes that frame secular bioethics are often motivated and shaped by these background cultural conflicts. These essays display this circumstance in rich ways.