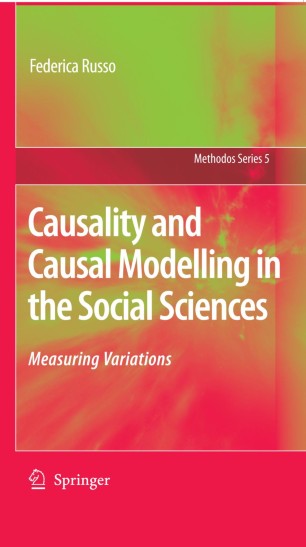 Causality and Causal Modelling in the Social Sciences

The anti-causal prophecies of last century have been disproved. Causality is neither a ‘relic of a bygone’ nor ‘another fetish of modern science’; it still occupies a large part of the current debate in philosophy and the sciences.

This investigation into causal modelling presents the rationale of causality, i.e. the notion that guides causal reasoning in causal modelling. It is argued that causal models are regimented by a rationale of variation, not of regularity nor invariance, thus breaking down the dominant Humean paradigm. The notion of variation is shown to be embedded in the scheme of reasoning behind various causal models: e.g. Rubin’s model, contingency tables, and multilevel analysis. It is also shown to be latent—yet fundamental—in many philosophical accounts. Moreover, it has significant consequences for methodological issues: the warranty of the causal interpretation of causal models, the levels of causation, the characterisation of mechanisms, and the interpretation of probability.

This book offers a novel philosophical and methodological approach to causal reasoning in causal modelling and provides the reader with the tools to be up to date about various issues causality rises in social science.

"Dr. Federica Russo's book is a very valuable addition to a small number of relevant publications on causality and causal modelling in the social sciences viewed from a philosophical approach".(Prof. Guillaume Wunsch, Institute of Demography, University of Louvain, Belgium)