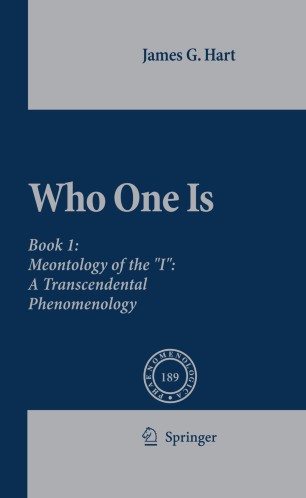 Meontology of the “I”: A Transcendental Phenomenology

Both volumes of this work have as their central concern to sort out who one is from what one is. In this Book 1, the focus is on transcendental-phenomenological ontology. When we refer to ourselves we refer both non-ascriptively in regard to non-propertied as well as ascriptively in regard to propertied aspects of ourselves. The latter is the richness of our personal being; the former is the essentially elusive central concern of this Book 1: I can be aware of myself and refer to myself without it being necessary to think of any third-personal characteristic; indeed one may be aware of oneself without having to be aware of anything except oneself. This consideration opens the door to basic issues in phenomenological ontology, such as identity, individuation, and substance. In our knowledge and love of Others we find symmetry with the first-person self-knowledge, both in its non-ascriptive forms as well as in its property-ascribing forms. Love properly has for its referent the Other as present through but beyond her properties.

Transcendental-phenomenological reflections move us to consider paradoxes of the "transcendental person." For example, we contend with the unpresentability in the transcendental first-person of our beginning or ending and the undeniable evidence for the beginning and ending of persons in our third-person experience. The basic distinction between oneself as non-sortal and as a person pervaded by properties serves as a hinge for reflecting on "the afterlife." This transcendental-phenomenological ontology of necessity deals with some themes of the philosophy of religion.