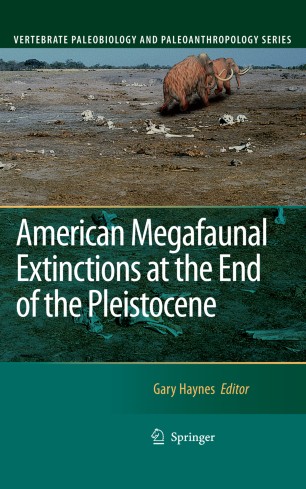 American Megafaunal Extinctions at the End of the Pleistocene

Part of the Vertebrate Paleobiology and Paleoanthropology book series (VERT)

The volume contains summaries of facts, theories, and unsolved problems pertaining to the unexplained extinction of dozens of genera of mostly large terrestrial mammals, which occurred ca. 13,000 calendar years ago in North America and about 1,000 years later in South America. Another equally mysterious wave of extinctions affected large Caribbean islands around 5,000 years ago. The coupling of these extinctions with the earliest appearance of human beings has led to the suggestion that foraging humans are to blame, although major climatic shifts were also taking place in the Americas during some of the extinctions. The last published volume with similar (but not identical) themes -- Extinctions in Near Time-- appeared in 1999; since then a great deal of innovative, exciting new research has been done but has not yet been compiled and summarized. Different chapters in this volume provide in-depth resumés of the chronology of the extinctions in North and South America, the possible insights into animal ecology provided by studies of stable isotopes and anatomical/physiological characteristics such as growth increments in mammoth and mastodont tusks, the clues from taphonomic research about large-mammal biology, the applications of dating methods to the extinctions debate, and archeological controversies concerning human hunting of large mammals.