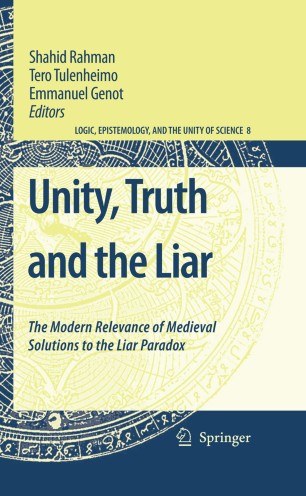 Unity, Truth and the Liar

The Modern Relevance of Medieval Solutions to the Liar Paradox

Part of the Logic, Epistemology, and the Unity of Science book series (LEUS, volume 8)

The Liar Paradox challenges logicians’ and semanticists’ theories of truth and meaning. Modern accounts of paradoxes in formal semantics offer solutions through the hierarchy of object language and metalanguage. Yet this solution to the Liar presupposes that sentences have unique meaning. This assumption is non-controversial in formal languages, but an account of how “hidden meaning” is made explicit is necessary to any complete analysis of natural language. Since the Liar Paradox presents itself as a sentence uniting contradictory meanings, appreciating how they can be united in a single sentence may provide new insights into this and other paradoxes.

This volume includes a target paper, taking up the challenge to revive, within a modern (formal) framework, a medieval solution to the Liar Paradox which did not assume Uniqueness of Meaning. Stephen Read, author of the target paper, attempts to formally state a theory of truth that dates back to the 14th century logician Thomas Bradwardine; the theory offers a solution to the Liar Paradox in which the Liar sentence turns out to be false. The rest of the volume consists of papers discussing and/or challenging Read’s – and Bradwardine’s -- views one the one hand, and papers addressing the doctrinal and historical background of medieval theories of truth on the other hand. It also includes a critical edition of Heytesbury’s treatise on insolubles, closely related to Bradwardine’s view.

Including formal, philosophical and historical discussions, this volume intends to renew the debate about paradoxes and theory of truth, and to show that the interest of earlier medieval work is not merely historical but, on the contrary, still relevant for modern, formal semantic theory. It is of interest for both professional philosophers and advanced students of philosophy.