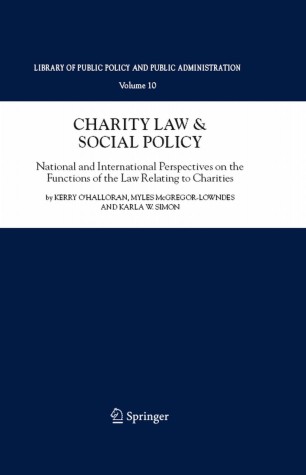 Charity Law & Social Policy explores contemporary law, policy and practice in a range of modern common law nations. It does so in four parts and from the perspective of how this has evolved in the UK.

As progenitor of a system bequeathed to its colonies and after centuries of leadership in developing the core principles, policies and precedents that subsequently shaped its development, the contribution of England & Wales, the originating jurisdiction, is first described and analysed in detail. This is achieved in the seven chapters comprising Parts 1 and 2. These broadly sketch the parameters and role of ‘charity’ – seen as a mix of public and private interests - then address the law’s role in protecting, policing, adjusting and supporting charity. This provides the critical dimensions for the comparative analysis of experience in the common law nations that constitutes the main part of the book.

Part 3, in 5 chapters, provides an analysis of the legal functions as they apply to type of need and thereby give effect to social policy in Singapore, Australia, New Zealand, Canada and the United States of America. Part 4 concludes with three chapters that appraise political influence as a factor in aligning charity law with social policy to create a facilitative environment for appropriate charitable activity. Attention is given to the central role of the regulator, contemporary charity law frameworks and definitional boundaries.