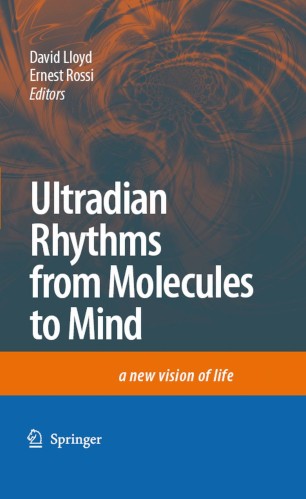 Ultradian Rhythms from Molecules to Mind

A New Vision of Life

5. 1. 1 Biological Rhythms and Clocks From an evolutionary perspective, the adaptation of an organism’s behavior to its environment has depended on one of life’s fundamental traits: biological rhythm generation. In virtually all light-sensitive organisms from cyanobacteria to humans, biological clocks adapt cyclic physiology to geophysical time with time-keeping properties in the circadian (24 h), ultradian (24 h) domains (Edmunds, 1988; Lloyd, 1998; Lloyd et al. , 2001; Lloyd and Murray, 2006; Lloyd, 2007; Pittendrigh, 1993; Sweeney and Hastings, 1960) By definition, all rhythms exhibit regular periodicities since they constitute a mechanism of timing. Timing exerted by oscillatory mechanisms are found throughout the biological world and their periods span a wide range from milliseconds, as in the action potential of n- rons and the myocytes, to the slow evolutionary changes that require thousands of generations. In this context, to understand the synchronization of a population of coupled oscillators is an important problem for the dynamics of physiology in living systems (Aon et al. , 2007a, b; Kuramoto, 1984; Strogatz, 2003; Winfree, 1967). Circadian rhythms, the most intensively studied, are devoted to measuring daily 24 h cycles. A variety of physiological processes in a wide range of eukaryotic organisms display circadian rhythmicity which is characterized by the following major properties (Anderson et al. , 1985; Edmunds, 1988): (i) stable, autonomous (self-sustaining) oscillations having a free-running period under constant envir- mental conditions of ca.