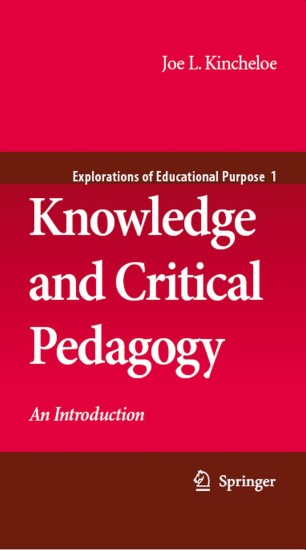 In a globalized neo-colonial world an insidious and often debilitating crisis of knowledge not only continues to undermine the quality of research produced by scholars but to also perpetuate a neo-colonial and oppressive socio-cultural, political economic, and educational system. The lack of attention such issues receive in pedagogical institutions around the world undermines the value of education and its role as a force of social justice. In this context these knowledge issues become a central concern of critical pedagogy. As a mode of education that is dedicated to a rigorous form of knowledge work, teachers and students as knowledge producers, anti-oppressive educational and social practices, and diverse perspectives from multiple social locations, critical pedagogy views dominant knowledge policies as a direct assault on its goals. Knowledge and Critical Pedagogy: An Introduction takes scholars through a critical review of the issues facing researchers and educators in the last years of the first decade of the twenty-first century. Refusing to assume the reader’s familiarity with such issues but concurrently rebuffing the tendency to dumb down such complex issues, the book serves as an excellent introduction to one of the most important and complicated issues of our time.