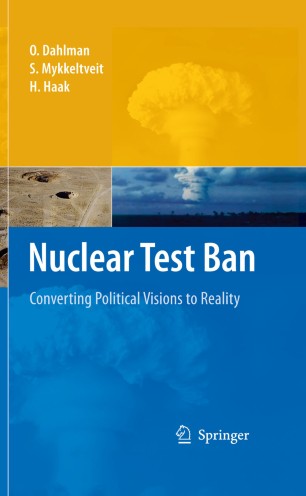 The book gives a broad presentation in laymen's language of the creation and the implementation of the treaty prohibiting nuclear test explosions (Comprehensive Nuclear-Test-Ban Treaty: CTBT), one of the key guarantors of nuclear non-proliferation. The writers, who personally guided this work for more than 25 years, give a unique insight into the challenging international work to establish a complex technological system with global coverage in a political environment.

Extensive nuclear testing has occurred and this is comprehensively reviewed, as are the arguments in favour of a test ban and efforts to implement one. The Conference on Disarmament in Geneva witnessed unprecedented efforts by scientists from around the world to form a common understanding of how to verify a test ban treaty and develop a prototype global verification system; work that was significant in building confidence at the height of the Cold War. The political negotiations and Treaty itself are briefly analysed, but the main part of the book is devoted to more than a decade of effort by the Preparatory Commission for the CTBT Organization to implement the treaty and its verification system: the most comprehensive verification system ever created, with a global coverage connecting more than 300 monitoring stations and an intrusive on-site inspection regime.

The first, most promising test results are also presented. An essential element of the book is its assessment of the experience gained through many years of political, managerial and technical activity. Such lessons, if well learned, can benefit the negotiations of future international treaties where verification is crucial, such as in arms control, disarmament or the environment.

Audience:
This book will be of interest to professionals in political, diplomatic and military areas,  and to politicians and their staffs. Scientists and graduate students in political science and researchers at institutions in security related fields and at NGOs will find valuable information in this book.