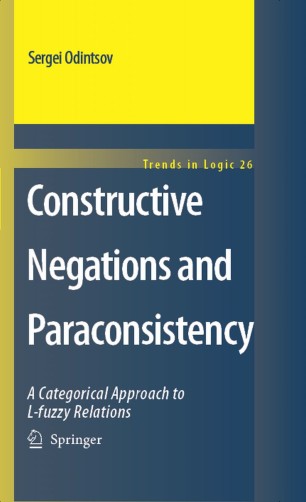 Part of the Trends in Logic book series (TREN, volume 26)

This book presents the author’s recent investigations of the two main concepts of negation developed in the constructive logic: the negation as reduction to absurdity (L.E.J. Brouwer) and the strong negation (D. Nelson) are studied in the setting of paraconsistent logic.

The paraconsistent logics are those, which admit inconsistent but non-trivial theories, i.e., the logics which allow making inferences in non-trivial fashion from an inconsistent set of hypotheses. Logics in which all inconsistent theories are trivial are called explosive. In the intuitionistic logic Li, the negation is defined as reduction to absurdity. The concept of strong negation is realized in the Nelson logic N3. Both logics are explosive and have paraconsistent analogs: Johansson’s logic Lj and paraconsistent Nelson’s logic N4. It will be shown that refusing the explosion axiom "contradiction implies everything" does not lead to decrease of the expressive power of a logic. To understand, which new expressive possibilities have the logics Lj and N4 as compared to the explosive logics Li and N3, we study the lattices of extensions of the logics Lj and N4. This is the first case when lattices of paraconsistent logics are systematically investigated. The study is based on algebraic methods, demonstrates the remarkable regularity and the similarity of structures of both lattices of logics, and gives essential information on the paraconsistent nature of logics Lj and N4.

The methods developed in this book can be applied for investigation of other classes of paraconsistent logics.