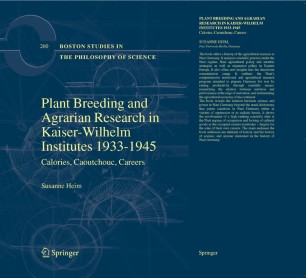 Part of the Boston Studies in The Philosophy of Science book series (BSPS, volume 260)

The book offers a history of the agricultural sciences in Nazi Germany. It analyzes scientific practice under the Nazi regime, Nazi agricultural policy and autarkic strategies as well as expansion policy in Eastern Europe. It also offers new insights into the Auschwitz concentration camp. It outlines the Nazi’s comprehensive nutritional and agricultural research program intended to prepare Germany for war by raising productivity through scientific means, researching the relation between nutrition and performance at the edge of starvation, and restructuring the agricultural economy of the continent. The book reveals the relation between science and power in Nazi Germany beyond the usual dichotomy that paints scientists in Nazi Germany either as victims of oppression or as sadistic beasts. It shows the involvement of a high ranking scientific elite in the Nazi regime of occupation and looting of cultural goods in the occupied eastern territories – largely for the sake of their own careers. The main audience the book addresses are students of history and the history of science, and anyone interested in the history of Nazi Germany.