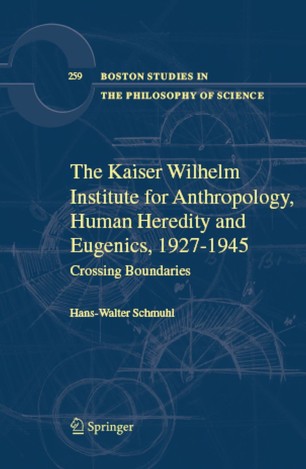 The Kaiser Wilhelm Institute for Anthropology, Human Heredity, and Eugenics, 1927–1945

Part of the Boston Studies in the Philosophy of Science book series (BSPS, volume 259)

When the Kaiser Wilhelm Institute for Anthropology, Human Heredity and Eugenics opened its doors in 1927, it could rely on wide political approval, ranging from the Social Democrats over the Catholic Centre to the far rightwing of the party spectrum. In 1933 the institute and its founding director Eugen Fischer came under pressure to adjust, which they were able to ward off through Selbstgleichschaltung (auto-coordination). The Third Reich brought about a mutual beneficial servicing of science and politics. With their research into hereditary health and racial policies the institute’s employees provided the Brownshirt rulers with legitimating grounds. At international meetings they used their scientific standing and authority to defend the abundance of forced sterilizations performed in Nazi Germany. Their expertise was instrumental in registering and selecting/eliminating Jews, Sinti and Roma, "Rhineland bastards", Erbkranke and Fremdvölkische. In return, hereditary health and racial policies proved to be beneficial for the institute, which beginning in 1942, directed by Otmar Freiherr von Verschuer, performed a conceptual change from the traditional study of races and eugenics into apparently modern phenogenetics – not least owing to the entgrenzte (unrestricted) accessibility of people in concentration camps or POW camps, in the ghetto, in homes and asylums. In 1943/44 Josef Mengele, a student of Verschuer, supplied Dahlem with human blood samples and eye pairs from Auschwitz, while vice versa seizing issues and methods of the institute in his criminal researches.

The volume at hand traces the history of the Kaiser Wilhelm Institute for Anthropology, Human Heredity and Eugenics between democracy and dictatorship. Special attention is turned to the transformation of the research program, the institute’s integration into the national and international science panorama, and its relationship to the ruling power as well as its interconnection to the political crimes of Nazi Germany.