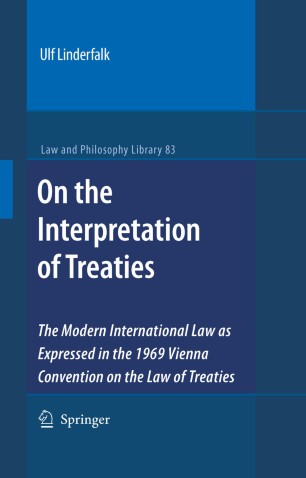 On The Interpretation of Treaties

In the practice of modern international law, disputes as to the meaning of specific treaty provisions are a frequent occurrence. It is the assumption underlying any such dispute that in a process of interpretation a distinction has to be made between the legally correct and incorrect interpretation result. The legal correctness of an interpretation result is determined by reference to the relevant international law, as reflected in the 1969 Vienna Convention on the Law of Treaties (VCLT), Articles 31-33. The result of an interpretation process is correct when it can be successfully defended as being in accordance with the provisions of VCLT Articles 31-33. The result is incorrect when it cannot be so defended.

Traditionally, the substance of Articles 31-33 has been described by reference to the various means of interpretation enumerated in said provisions, and little more than that. As argued in this book, more detail is required. On closer inspection, not only does the Vienna Convention provide information on the interpretation data (or means of interpretation) to be used by appliers when interpreting a treaty provision. It also instructs the appliers how, by using each datum, they shall argue to arrive at a conclusion about the meaning of the interpreted provision; and, to some extent, it determines the weight that different data of interpretation shall be afforded when appliers discover that, depending on the specific datum they bring to bear on the interpretation process, the conclusion arrived at will be different. Hence, the regime laid down in VCLT Articles 31-33 will have to be described as a system of rules.

This book investigates the contents and structure of this system. By importing knowledge from linguistics, and pragmatics in particular, a model is established giving representation to the concept of a rule of interpretation. Drawing on this model, the book then proceeds to reconstruct the contents of the various rules of interpretation. To facilitate reference, the conclusions suggest a list of 44 rules, all of which can be invoked by appliers citing VCLT Articles 31-33.