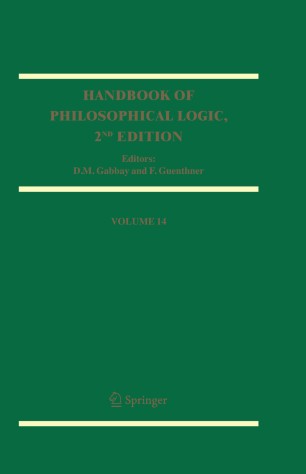 theywereextensivelydiscussedbyallauthorsina3-dayHandbookmeeting. These are: • a chapter on non-monotonic logic • a chapter on combinatory logic and ?-calculus We felt at the time (1979) that non-monotonic logic was not ready for a chapter yet and that combinatory logic and ?-calculus was too far re- 1 moved. Non-monotonic logic is now a very major area of philosop- cal logic, alongside default logics, labelled deductive systems, ?bring l- ics, multi-dimensional, multimodal and substructural logics. Intensive - examinations of fragments of classical logic have produced fresh insights, including at time decision procedures and equivalence with non-classical systems. Perhaps the most impressive achievement of philosophical logic as arising inthepastdecadehasbeenthee?ectivenegotiationofresearchpartnerships with fallacy theory, informal logic and argumentation theory, attested to by the Amsterdam Conference in Logic and Argumentation in 1995, and the two Bonn Conferences in Practical Reasoning in 1996 and 1997. These subjects are becoming more and more useful in agent theory and intelligent and reactive databases. Finally, ?fteen years after the start of the Handbook project, I would like to take this opportunity to put forward my current views about logic in computer science, computational linguistics and arti?cial intelligence. In the early 1980s the perception of the role of logic in computer science was that of a speci?cation and reasoning tool and that of a basis for possibly neat computer languages. The computer scientist was manipulating data structures and the use of logic was one of his options.