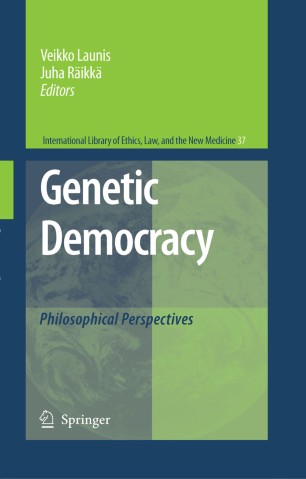 Part of the International Library Of Ethics, Law, And The New Medicine book series (LIME, volume 37)

GENETIC DEMOCRACY involves an in-depth analysis of the ethical, social and philosophical issues related to modern genetic research and gene technology. The aim of the book is to introduce systematic research on the social and ethical impacts of the use and development of genetically modified organisms (GMOs) as well as the acquisition, use and storage of human genetic information (HGI). The book contributes into enhancing public discussion and reaching fair and democratic decision-making practices in GMO and HGI use and development both on local and global level.

There are currently few European texts which address the issues involved in a theoretical and systematical manner. GENETIC DEMOCRACY have been written from the viewpoint of social and political philosophy rather than that of traditional bioethics. There is a clear need for a throughout and authoritative philosophical and ethical analysis of the issues involved in genetic research and gene technology. The book will appeal to philosophers, social scientists, genetics professionals, policy makers, academics, industrial organisations and human rights organisations as well as university students and legal scholars. The book will have a broad appeal across Europe, Asia and America since many states are currently considering policy responses to many of the practices discussed in the books (e.g., human biobanks).