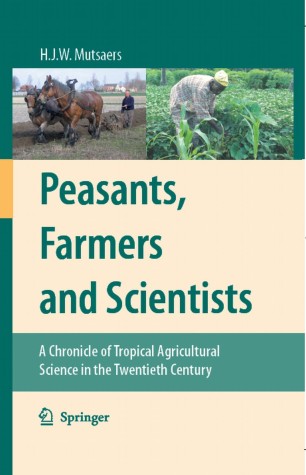 A Chronicle of Tropical Agricultural Science in the Twentieth Century

This book is a critical account of tropical agricultural science and agricultural development in the twentieth century, in particular in Africa. It describes successes as well as fads and failures, from the perspective of a practitioner of more than 40 years. The emphasis is on the second half of the century, but the story frequently reaches deep into the first half of the century as well.

The book’s premise is that the story of tropical agricultural science and agricultural development can be told in a single volume at a more than trivial level, understandable for people of normal intelligence. It tries to uncover what real value there has been in the major areas of study (Farming Systems Research, Natural Resource Management, crop modelling, etc.) after peeling off the multiple protective layers applied by the profession. It also takes a critical look at agricultural and general development which has become inflated with hot air to the point of blowing itself apart in the early twenty first century.

A wide range of topics is covered, including interesting early science from the beginning of the last century (sugarcane breeding and shifting cultivation in Indonesia, anthropological studies in German West Africa), fascinating indigenous farming practices in Africa, the history of Farming Systems Research and its offshoots, sense and nonsense of computer modelling of crop growth, and the role of development projects and consultants. The treatment is closely linked with the author's professional career, but the emphasis is on the subject matter.