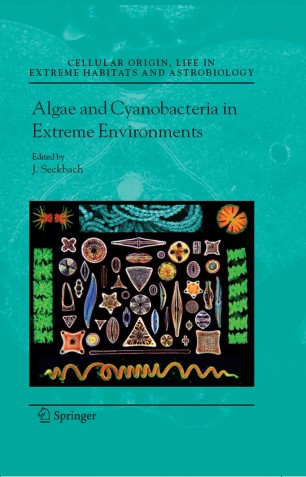 Algae and Cyanobacteria in Extreme Environments

ALGAE AND CYANOBACTRIA IN EXTREME ENVIRONMENTS is a unique collection of essays, contributed by leading scientists from around the world, devoted to algae – and some related microbes – observed in unexpected harsh habits, which it seems are an oasis or Garden of Eden for these organisms. This timely book on Extremophilic alga, including its especially impressive micrographs, may provide clues about the edges of life on Earth and possibly elsewhere in the universe.

Defining locations from the anthropomorphic point of view, the environments explored ranges from severe and distant to "normal" places. The algae discussed, microbial oxygenic phototrophs, are classified into various categories according to their habitats. They thrive in various temperature ranges, at the limits of pH values, in salt solutions, under UV radiation, dryness, heavy metals, anaerobic niches, under various levels of illuminations, and under hydrostatic pressure. Authors discuss bio-diversely algal territories ecologically – the hot springs with the thermophiles or acido-thermophiles; Antarctica, the Artic, and permafrost zones with their cold lovers (Psychrophiles); soda lakes with the alkaliphiles, saltine areas with halophiles. In addition to general essays, Algal species discussed in detail include diatoms, Cyanidium, Galdieria, Dunaliella, and Chroococcidiopsis.

This volume is a must for students of the field of biodiversity, as well as those in Phycology, ecology and general biological research.