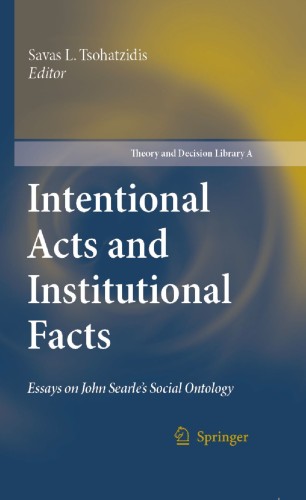 This book includes ten original essays that critically examine central themes of John Searle’s ontology of society, as well as a new essay by Searle that summarizes and further develops his work in that area. The critical essays are grouped into three parts. Part I (Aspects of Collective Intentionality) examines the account of collective intention and action underlying Searle’s analysis of social and institutional facts, with special emphasis on how that account relates to the dispute between individualism and anti-individualism in the analysis of social behaviour, and to the opposition between internalism and externalism in the analysis of intentionality. Part II (From Intentions to Institutions: Development and Evolution) scrutinizes the ontogenetic and phylogenetic credentials of Searle’s view that, unlike other kinds of social facts, institutional facts are uniquely human, and develops original suggestions concerning their place in human evolution and development. Part III (Aspects of Institutional Reality) focuses on Searle’s claim that institutional facts owe their existence to the collective acceptance of constitutive rules whose effect is the creation of deontic powers, and examines central issues relevant to its assessment (among others, the status of the distinction between regulative and constitutive rules, the significance of the distinction between brute and deontic powers, the issue of the logical derivability of normative from descriptive propositions, and the import of the difference between moral and non-moral normative principles). Written by an international team of philosophers and social scientists, the essays aim to contribute to a deeper understanding of Searle’s work on the ontology of society, and to suggest new approaches to fundamental questions in that research area.