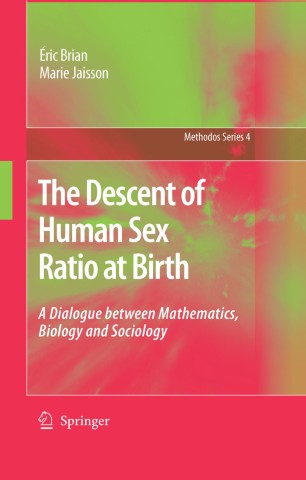 The Descent of Human Sex Ratio at Birth

A Dialogue between Mathematics, Biology and Sociology

"Since the 18th century, one phenomenon, the proportion of the sexes at birth among human beings, has contributed to various developments such as the calculus of probabilities, administrative statistics, the moral and social sciences, the statistics of variability, post-Darwinian biology and Durkheimian sociology. This fact is brought to the critical attention of readers who rarely work together -- mathematicians, biologists, historians, social scientists and historians of the sciences -- along a three centuries European journey, meeting Süssmilch, Condorcet, Laplace, Fourier, Girou de Buzareingues, Poisson, Quetelet, Darwin, Düsing, Gini, Halbwachs or Fisher."

"After a deconstruction of the past and present conditions of scientific understanding of human sex-ratio at birth, the authors are proposing a reconstruction of the dynamics of the phenomenon based on stochastics. This is an attempt in renewing our links with the oldest traditions of scholarly thinking, but too a kind of "well-tempered" reflexivity in today’s work of objectivization."

"Appendixes get to the reader the first expression of a trend of the sex ratio at birth to adjust towards balance between the sexes by Condorcet in 1793-1794 ; a comparison of passages that Darwin devoted in 1871 and 1874 to similar issues ; and a sociological attempt of Halbwachs published in 1933."