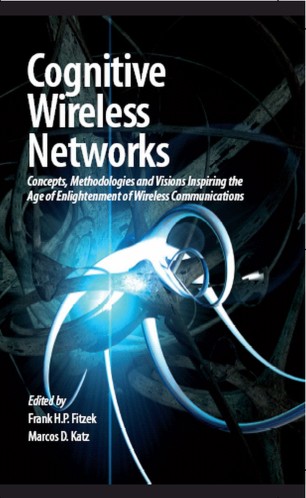 Concepts, Methodologies and Visions Inspiring the Age of Enlightenment of Wireless Communications

In the Age of Enlightenment the German philosopher Immanuel Kant encouraged people to use their own mind as the basis for reasoning instead of following dogmatic religious rules - Sapere aude! (dare to know!) - Today wireless communication networks are increasingly becoming aware of the conditions of its their component parts and surrounding environment. Cognition, a continuous process involving sensing, reasoning, understanding and reacting, can be applied to wireless networks in order to adapt the system to the highly dynamic wireless ecosystem. The ultimate goals are to enhance the efficiency in the use of radio resources as well as to improve both link and network performance. This book presents a detailed overview of a rapidly emerging topic in modern communications: cognitive wireless networks. The key aspects of cognitive and cooperative principles in wireless networks are discussed in this book. Furthermore, Cognitive Wireless Networks advocates the concept of breaking up the cellular communication architecture by introducing cooperative strategies among wireless devices. Cognitive wireless networking is the key to success in handling the upcoming dynamic network configurations and exploiting this cross-over to the fullest extent.

As wireless networks become pervasive, highly populated and increasingly complex, the essential preconditions for exploiting rich interactions among mobile devices are better fulfilled. Today, these trends are giving rise to new communications paradigms making use of cooperation and cognition as the main underlying principles. Cognition, together with its complementary principle cooperation, confer to the wireless networks some degree of consciousness or understanding about their own existence, such as internal structure, capabilities, relationships to the outside world, limitations, current use of radio resources and many more. Current wireless networks are aware of their surrounding environment to a very limited extent, but in future wireless networks this capability will be highly developed, as a consequence of exploiting jointly cooperative and cognitive principles. Especially for cooperative wireless networks, where the communication scenario is highly dynamic, the mobile devices need to adapt their capabilities in a flexible manner, taking advantage of cognitive principles.

Frank H. P. Fitzek is an Associate Professor in the Department of Communication Technology, University of Aalborg, Denmark heading the Future Vision group. His current research interests are in the areas of 4G wireless communication networks, cross layer protocol design and cooperative networking.

Dr. Fitzek received his diploma (Dipl.-Ing.) degree in electrical engineering from the University of Technology - Rheinisch-Westfälische Technische Hochschule (RWTH) - Aachen, Germany, in 1997 and his Ph.D. (Dr.-Ing.) in Electrical Engineering from the Technical University Berlin, Germany in 2002 for quality of service support in wireless CDMA networks. As a visiting student at the Arizona State University he conducted research in the field of video services over wireless networks. He co-founded the start-up company acticom GmbH in Berlin in 1999. In 2002 he was Adjunct Professor at the University of Ferrara, Italy giving lectures on wireless communications and conducting research on multi-hop networks. In 2005 he won the YRP award for the work on MIMO MDC.