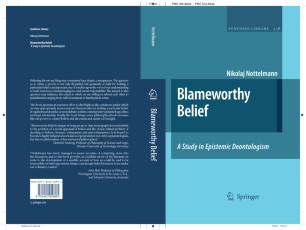 A Study in Epistemic Deontologism

Believing the wrong thing may sometimes have drastic consequences. The question as to when a person is not only ill-guided, but genuinely at fault for holding a particular belief is an important one: It touches upon the roots of our understanding of such notions as criminal negligence and moral responsibility. The answer to this question may influence the extent to which we are willing to submit each other to punishments ranging from mild resentment to harsh prison terms.

This book presents an extensive effort to shed light on the conditions under which we may appropriately deem someone blameworthy for holding a particular belief. It regiments and unifies several debates within contemporary epistemology, ethics and legal scholarship. Finally, the book brings a new philosophical look on issues like our power to control beliefs and the extent and nature of foresight.


"Blameworthy Belief is unique in being an up-to-date monograph devoted entirely to the problem of a moral appraisal of beliefs and the closely related problem of deciding to believe (doxastic voluntarism and anti-voluntarism). It is bound to become a highly influential work and is of great interest not only to epistemologists, but also to philosophers of law and moral philosophers." Heinrich Wansing, Professor of Philosophy of Science and Logic, Dresden University of Technology, Germany

"Nottelmann has nicely managed to weave accounts of competing views into his discussion, and so this book provides an excellent survey of the literature en route to the development of a sensible account of how we could be said to be responsible for believing various things, even though belief formation is not under our voluntary control." John Heil, Professor of Philosophy, Washington University in St. Louis, U.S.A., and Monash University, Australia