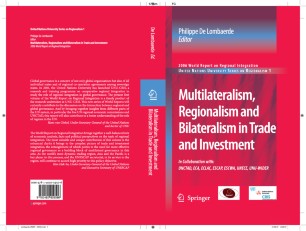 Multilateralism, Regionalism and Bilateralism in Trade and Investment

Global governance is a concern of not only global organisations but also of all individual states and of regional co-operation agreements among sovereign states. In 2001, the United Nations University has launched UNU-CRIS, a research and training programme on comparative regional integration to study the role of regional integration in global governance. The present first volume of the World Report on Regional Integration is a timely product of the research undertaken at UNU-CRIS. This new series of World Reports will certainly contribute to the discussion on the interaction between regional and global governance. And by bringing together insights from different parts of the UN system, in particular the five UN regional economic commissions and UNCTAD, this report will also contribute to a better understanding of the role of regions in the UN.
Hans van Ginkel, Under-Secretary-General of the United Nations and Rector of UNU

The World Report on Regional Integration brings together a well-balanced mix of economic analysis, facts and political perspectives on the topic of regional integration. The most valuable and unique contribution of this volume is the enhanced clarity it brings to the complex picture of trade and investment integration, the entanglement of which points to the need for more effective regional governance as a building block of multilateral governance in this area. As the world’s most dynamic trading region, Asia and the Pacific is a key player in this process, and the UNESCAP secretariat, in its service to the region, will continue to accord high priority to this policy objective.
Kim Hak-Su, Under-Secretary-General of the United Nations and Executive Secretary of UNESCAP