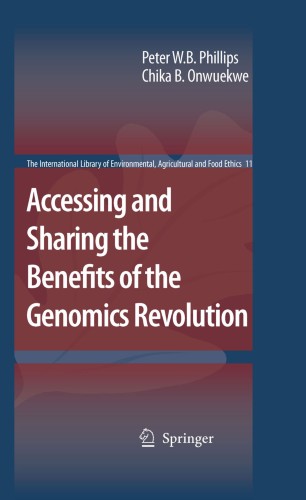 Accessing and Sharing the Benefits of the Genomics Revolution

Part of the The International Library of Environmental, Agricultural and Food Ethics book series (LEAF, volume 11)

There is a veritable gold rush mentality in the life science world as scientists, entrepreneurs and multinationals are staking claims to the ‘code of life’ embodied in the world’s current stock of plants, animals, microbes and human populations. In response, the communities that see themselves as the custodians of both that traditional knowledge and specific genetic resources have demanded greater recognition of their role in creating and conserving this resource, access to any resulting improvements and a share of the benefits arising from their patrimony. This has precipitated a widespread effort—in local communities, in the marketplace, in many developing and developed countries and at the talks in the Doha Round of the WTO—to reconcile the interests and concerns of the two opposing groups.

This edited volume explores the legal, economic and political context for the debate about intellectual property rights for traditional knowledge and genetic resources and critically analyses the theory and practice of access and benefits sharing efforts around the world. The book also investigates the current flashpoints—the David and Goliath battle between Monsanto and Percy Schmeiser over farmers’ rights; the dispute over coexistence of GM and organic production; and the ownership and control of human genetic materials stored in human gene banks around the world.