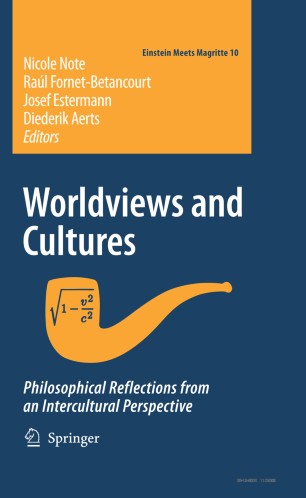 Philosophical Reflections from an Intercultural Perspective

Globalization brings people and cultures together, producing, in addition to deep and rich encounters, exclusion, racism, xenophobia and asymmetries. The present book takes these issues implicitly as its starting point by thoroughly reflecting on them from a perspective of worldviews, as one of many approaches.

More specifically, it focuses on people’s implicit and explicit interpretations and assumptions of the world, of themselves and of others. Often deeply rooted and hard to change, they have an important function, for without them we would continually need to question what we do and what we think. In their absolutist form, these assumptions may become a barrier for open-mindedness, and hence for deep intercultural understanding and exchange. We need to find a balance between both stances.

Intercultural philosophy tries to fulfil this role, on the one hand by comparing different cultures on a deep philosophical level, and as a way to better understand each other’s core assumptions, and on the other hand by arguing for an intercultural philosophy grounded in specific cases. The contributions of this book conceive of "another possible world" which does not condemn cultural and religious diversity as a detonator for "Clashes of Civilizations", but rather welcomes it as a source of inspiration for all and of respect for the "different".

Born in 1946 in Holguín (Cuba). Resides in Germany form 1972. He has a PhD in Philosophy (University of Salamanca, Spain) and a PhD in Linguistics and Theology (University of Aachen). Currently he is professor at the University of Bremen and Aachen, and invited professor of the  Universidad Pontificia de México and  the Universidad Unisinos en São Leopoldo (Brasil). Moreover is he  director of the section on Latin América at The International Catholic Missionary Action ‘Missio’ (Aachen). He has organised various congresses worldwide and can be called one of the founding fathers of intercultural philosophy. He has written about 200 hundred works.

Born in Switzerland, studied Theology and Philosophy in Lucerne, Nijmegen, Utrecht and Amsterdam. Ph.D. in Philosophy and M.A. in Theology. Eight years of field experience in Cusco (Peru), five years as Director of the Institute of Missiology in Aachen (Germany), five years as professor and researcher at the Higher Ecumenical Andean Theological Institute ISEAT in La Paz (Bolivia); professor at the Bolivian Catholic University and the State University UMSA in La Paz (Bolivia). National Coordinator of the Bethlehem Mission (BMI) in Bolivia. Married and father of three children.

Is professor at the 'Brussels Free University (Vrije Universiteit Brussel - VUB)' and director of the 'Leo Apostel Centre (CLEA)', an interdisciplinary and interuniversity (VUB, UGent, KULeuven) research centre, where researchers of different disciplines work on interdisciplinary projects. He is also head of the research group 'Foundations of the Exact Sciences (FUND)' at the VUB. He is editor of the international journal 'Foundations of Science (FOS)' and a board member of the 'Worldviews group', founded by the philosopher Leo Apostel, which investigates the possibility of constructing integrated worldviews, taking into account the recent scientific findings. He was the scientific and artistic coordinator of the 'Einstein meets Magritte' conference, where the world's leading scientists and artists gathered to reflect about science, nature, human action and society. The material of the conference has been published in an eight-volume series by by Springer and VUBPress.