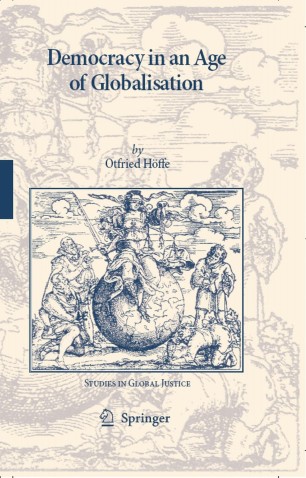 Democracy in an Age of Globalisation

In Democracy in an Age of Globalisation, Otfried Höffe develops a comprehensive analysis of the demands, which the process of globalization exerts on the political organisations of humanity.

The author starts from a diagnosis of the process of globalisation and frees its concept from its economistic narrowing: Globalisation is a comprehensive process which puts new strains on the economies and political systems of the world, the cultural and social structures of peoples. The scope of its challenges demands solutions, which transcend the powers of the classical nation-state. The question central to the book can be formulated as follows: "How can the social, moral and legal achievements of the nation-state be retained while its structure is reshaped to satisfy the requirements of a globalised world?"

"Against grass-roots communitarianism as well as against highbrow globalism, the author chooses the realisation of a multilevel world republic that plays the role of an instance of negotiation and settlement. He respects cultural particularities and national characters, while observing at the same time the commandments of the world social contract that governs the relations between the states and their citizens." Ludger Heidebrink, Die Zeit

"’Democracy…’ is a cautious precision-work. It is a bold, though carefully arguing book that does not deal with less than the legitimacy and the main characteristics of a future world republic. […] Höffe’s extraordinary book represents a significant contribution to the most important questions asked by the beginning of the new century that is characterised by ‘globalisation’." Georg Kohler, NZZ