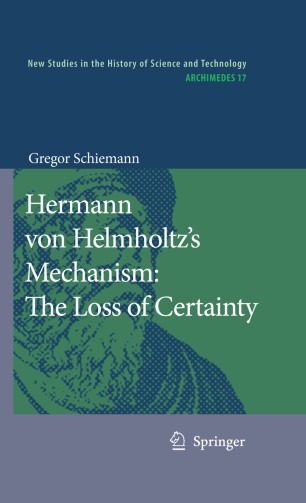 Two seemingly contradictory tendencies have accompanied the development of the natural sciences in the past 150 years. On the one hand, the natural sciences have been instrumental in effecting a thoroughgoing transformation of social structures and have made a permanent impact on the conceptual world of human beings. This historical period has, on the other hand, also brought to light the merely hypothetical validity of scientific knowledge. As late as the middle of the 19th century the truth-pathos in the natural sciences was still unbroken. Yet in the succeeding years these claims to certain knowledge underwent a fundamental crisis. For scientists today, of course, the fact that their knowledge can possess only relative validity is a matter of self-evidence.

The present analysis investigates the early phase of this fundamental change in the concept of science through an examination of Hermann von Helmholtz's conception of science and his mechanistic interpretation of nature. Helmholtz (1821-1894) was one of the most important natural scientists in Germany. The development of this thought offers an impressive but, until now, relatively little considered report from the field of the experimental sciences chronicling the erosion of certainty.