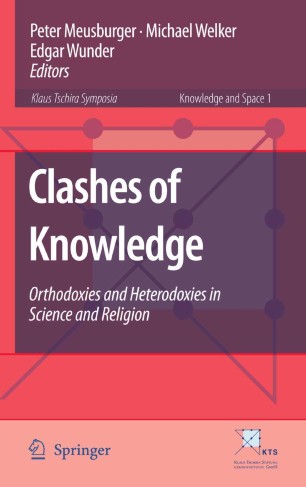 Orthodoxies and Heterodoxies in Science and Religion

Part of the Knowledge and Space book series (KNAS, volume 1)

"Clashes of Knowledge" is the first volume of a series called "Knowledge and Space" dealing with spatial disparities of knowledge and the impact of the spatial context on the production and application of knowledge. The contributions in this book explore the conflicts between various types of knowledge, especially between orthodox and heterodox knowledge systems, which range from religious fundamentalism to heresies within the scientific community itself. Does the traditional distinction between "belief" and "knowledge" still make sense? How is the difference between knowledge and belief understood in different cultural contexts? How have the religious-based knowledge systems been displaced in their hegemonic role by "scientific" knowledge? In which ways do the agents of hegemonic, orthodox knowledge interact with the representatives of deviating, heterodox knowledge? These and many other questions are addressed by scholars of geography, history of science, philosophy, psychology, religious studies, sociology, theology, etc. A number of articles describe how scientists attempt to systematically exclude implausible knowledge claims from their disciplines and how the boundaries of science are subject to historical change and to spatial and cultural contexts.

Knowledge systems can also clash at the level of the individual. Why do people often ignore information that contradicts their personal "knowledge"? Under what conditions are people prepared to give up firm beliefs and integrate new information that contradicts their prior knowledge? This book thus addresses many fields in the academy but also learned individuals who are interested in the often puzzling spatial and cultural disparities of knowledge and clashes of knowledge.