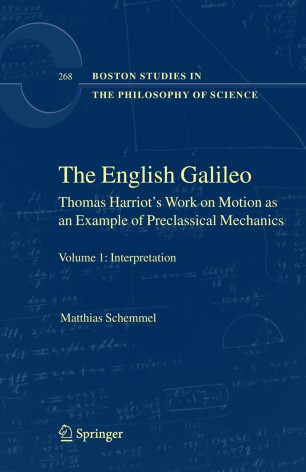 Part of the Boston Studies in the Philosophy of Science book series (BSPS, volume 268)

The short series The Historical Epistemology of Mechanics presents the long-term development of mechanical knowledge. The books in this series combine the presentation of a broad selection of relevant sources with in-depth analyses of the long-term development of mechanical knowledge focusing on the early modern period. This series is conceived in analogy to the four-volume series on The Genesis of General Relativity (BSPS 250).
The English Galileo, the first book in this series, investigates the shared knowledge of preclassical mechanics by relating the work of Thomas Harriot on motion, documented by a wealth of manuscripts, to that of Galileo and other contemporaries.
Harriot and Galileo indeed exploited the same shared knowledge resources in order to approach the same challenging objects. While the paths Harriot traces through the shared knowledge are different from Galileo’s, the work of the two scientists displays striking similarities as regards their achievements as well as the problems they were unable to solve. The study of Harriot’s parallel work thus allows the exploration of the structure of the shared knowledge of early modern mechanics, to perceive possible alternative histories, and to distinguish between individual peculiarities and shared structures of early modern mechanical reasoning. This study has received two distinguished awards, the Junior Scholar Award of the Georg Agricola Society and the Georg Uschmann Award of the German National Academy of Sciences, Leopoldina.