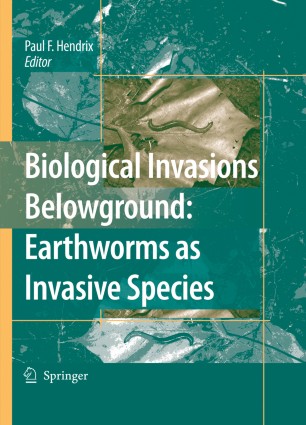 The most conspicuous biological invasions in terrestrial ecosystems have been by exotic plants, insects and vertebrates. Less conspicuous but possibly of equal importance are invasions by soil invertebrates, which are occurring literally beneath our feet. Familiar examples include the South American fire ant (Solenopsis invicta) which has invaded North America and Australia, and the New Zealand flatworm (Arthurdendyus triangulatus) which has become wide-spread in the United Kingdom; both have caused considerable ecological and economic damage. There is now evidence that exotic earthworm invasions are increasing world-wide and may be having significant impacts on soil processes and plant communities in some regions. Much remains to be learned about these ‘cryptic’ biological invasions. The papers in this book are based on efforts by an international group of soil ecologists to assess the biological and ecological mechanisms of earthworm invasions, their geographic extent and impacts on terrestrial ecosystems, and possible means by which earthworm invasions might be mitigated.