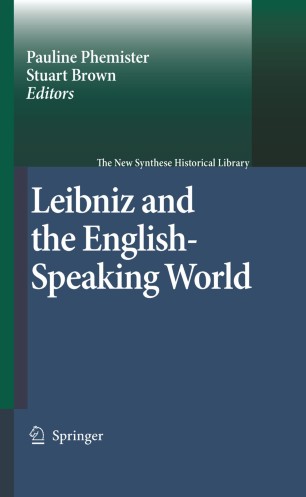 Leibniz and the English-Speaking World

These essays comprise a first attempt to assess overall the attention awarded to Leibniz’s philosophy in the English-speaking world in his own time and up to the present day.

In addition to an introductory overview there are fourteen original and previously unpublished essays considering Leibniz’s connections with his English-speaking contemporaries and near contemporaries as well as the later reception of his thought in Anglo-American philosophy. Some of the papers shed new light on familiar topics, including the influence of Hobbes on Leibniz, his relations with Locke and the well-publicised controversy with Samuel Clarke. Others chart less familiar territory, including Leibniz’s connections with Boyle and Berkeley, Wilkins and Dalgarno. And others still break new ground in considering Leibniz’s connections with John Wallis and Margaret Cavendish. There are four concluding papers on the later reception of Leibniz’s philosophy in the English-speaking world, including two on Bertrand Russell and Leibniz, and two on the reception of Leibniz by American philosophers, Peirce and Loemker.