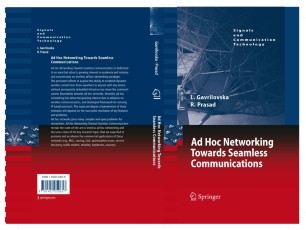 Ad-Hoc Networking Towards Seamless Communications is dedicated to an area that attracts growing interest in academia and industry and concentrates on wireless ad hoc networking paradigm. The persistent efforts to acquire the ability to establish dynamic wireless connections from anywhere to anyone with any device without prerequisite imbedded infrastructure move the communications boundaries towards ad-hoc networks. Recently, ad hoc networking has attracted growing interest due to advances in wireless communications, and developed framework for running IP based protocols. The expected degree of penetration of these networks will depend on the successful resolution of the key features.

Ad-hoc networks pose many complex and open problems for researchers. Ad-Hoc Networking Towards Seamless Communications reveals the state-of-the-art in wireless ad-hoc networking and discusses some of the key research topics that are expected to promote and accelerate the commercial applications of these networks (e.g., MAC, routing, QoS, cross-layer optimization issues, service discovery, mobility, handovers, security).